WE RELY ON YOUR GENEROSITY. PLEASE SUPPORT US, DONATE TODAY 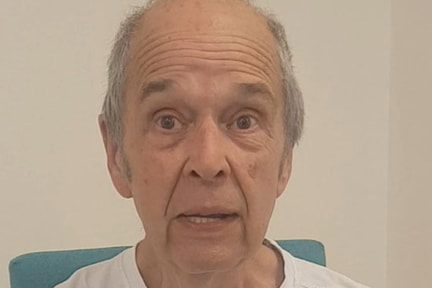 Graham Barrett, a retired travel agent, has spent his working life serving the public and is ‘front of house’ at the coffee shop at Cannock Chase Hospital. But he got the chance to take his role a step further when he played Santa and delivered presents to children spending Christmas in hospital.

“I’ve been a volunteer with the League of Friends at Cannock Chase Hospital for about 10 years now,” said Graham, 77, from Penkridge. “What sparked the interest was my retirement was looming and I thought ‘I’m going to miss all this, I can’t just shut off. I need to do something and carry on being active.’

“So, as Cannock Chase Hospital has given me a lot of treatment for arthritis over the years, I decided to apply for a position and they said they’d got one in the coffee bar. I met a nice lady called Sue; she’s now my partner in the job and we’ve been together for about 10 years.”

Graham, who has also volunteered on the Severn Valley Railway and worked in the bookings office at Birmingham New Street station, added: “I hadn’t been there very long when I was asked to play Father Christmas. I had to take presents for the children in the wards and that was very rewarding – a good start to my new job. It was a delight to see their faces – and it was really fantastic for me, I got a real kick out of it. Not long after, I was asked to go to Stafford Hospital to do the same thing and I was delighted. I haven’t got the figure for Father Christmas, but they stuffed me with pillows and gave me a beard and sent me on my way. That was one of the highlights of my career there.

“During my general shift, we don’t just serve coffee and cakes; we help patients get to their appointments. We can see them coming in worried about results and so forth; some of them are disabled and need your arm to help them along and you just say to them ‘Are you lost?’ They immediately show you their letter saying which department they want and we can take them or show them where to go. On occasions I have escorted patients to a different floor.”
​
Graham has this positive message for anyone thinking of volunteering. “If your retirement is looming, don’t sit and fester, don’t get under your partner’s feet, go out and do something,” he said. “Go and volunteer – it will give you a kick and a glow, you will feel a great satisfaction and I would recommend it thoroughly. It’s a real tonic.”

Return to League News
Facebook Twitter Envelope Instagram
© COPYRIGHT 2019 THE DESIGN MILL
THE STAFFORD AND CANNOCK LEAGUE OF HOSPITAL FRIENDS IS A COMPANY LIMITED BY GUARANTEE, REGISTERED IN ENGLAND AND WALES NO. 02545804 AND ALSO REGISTERED WITH THE CHARITY COMMISSION NO.1001476